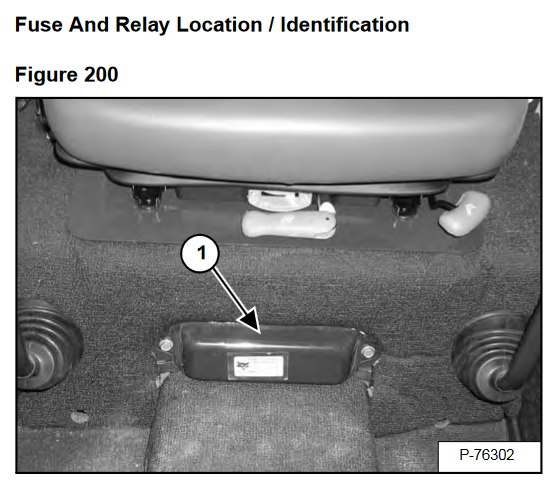 At the end of my “Clearance: Half Off” post I mentioned that we still had a problem with the Bobcat: its glowplugs were not working.

Unlike gasoline engines, Diesels do not have spark plugs.  To ignite their fuel they use the fact that the temperature of any gas will increase as you compress it. The piston compresses air inside a cylinder until it is hot enough to ignite diesel fuel.  Then at the proper time the engine injects fuel into the cylinder to ignite it, which then drives the piston back down.

But this only works if the temperature inside the cylinder gets hot enough to ignite diesel fuel.  If the engine is too cold a diesel engine can’t start without some help.  This is what glowplugs are for.

When it got cold enough outside, our Bobcat started warning us that the glowplugs were not working right.  And sure enough: the colder it got outside, the more difficult it was to start the Bobcat.

Now remember, the main reason we need the Bobcat is to clear snow from the driveway. So a glowplug warning in cool weather is quite likely to become a show-stopper in cold, snowy weather, right when we need the Bobcat most.  This was a problem that we needed to fix before we got snow.

Fortunately, glowplugs are pretty simple devices. And a quick review of the Bobcat wiring diagram confirmed that the circuit was pretty simple too.  The problem had to be either a bad glowplug or a bad relay.  And since there is one glowplug for each cylinder, the Bobcat would likely still start easily if only one glowplug were bad.  So it would seem that either all glowplugs had failed (not likely) or something common to all glowplugs had failed (much more likely).

The only thing common to all glowplugs is the relay, which supplies power to them when it is cold out.  The relay is located in the Bobcat’s fuse box, plugged into a socket there.

So our problem could be that the relay was bad, or there was a bad connection in the relay socket.

Last weekend I finally had the chance to investigate on-site.  I quickly proved that it was the glowplug relay itself by swapping the relay with another, known-good relay nearby.

No more flashing warning light, and the Bobcat fired right up.  Victory!

I could have just left it at that, with the relays swapped. (The known-good relay had controlled the rear floodlights.)  But I noticed that it was possible to pop off the relay cover and peek inside.  This is what that looks like.

It was pretty clear that the relay had gotten wet; it was dirty and corroded inside.  But mechanically it still seemed to work.  So I spent a few minutes cleaning it, blowing out the dirt and exercising the mechanism.

After that, poking around with a volt-ohm meter suggested that it was working again.  So I snapped the cover back on and tried it in the Bobcat. Joy ensued.

Now I have working glowplugs and rear floodlights.  Bring on the snow!