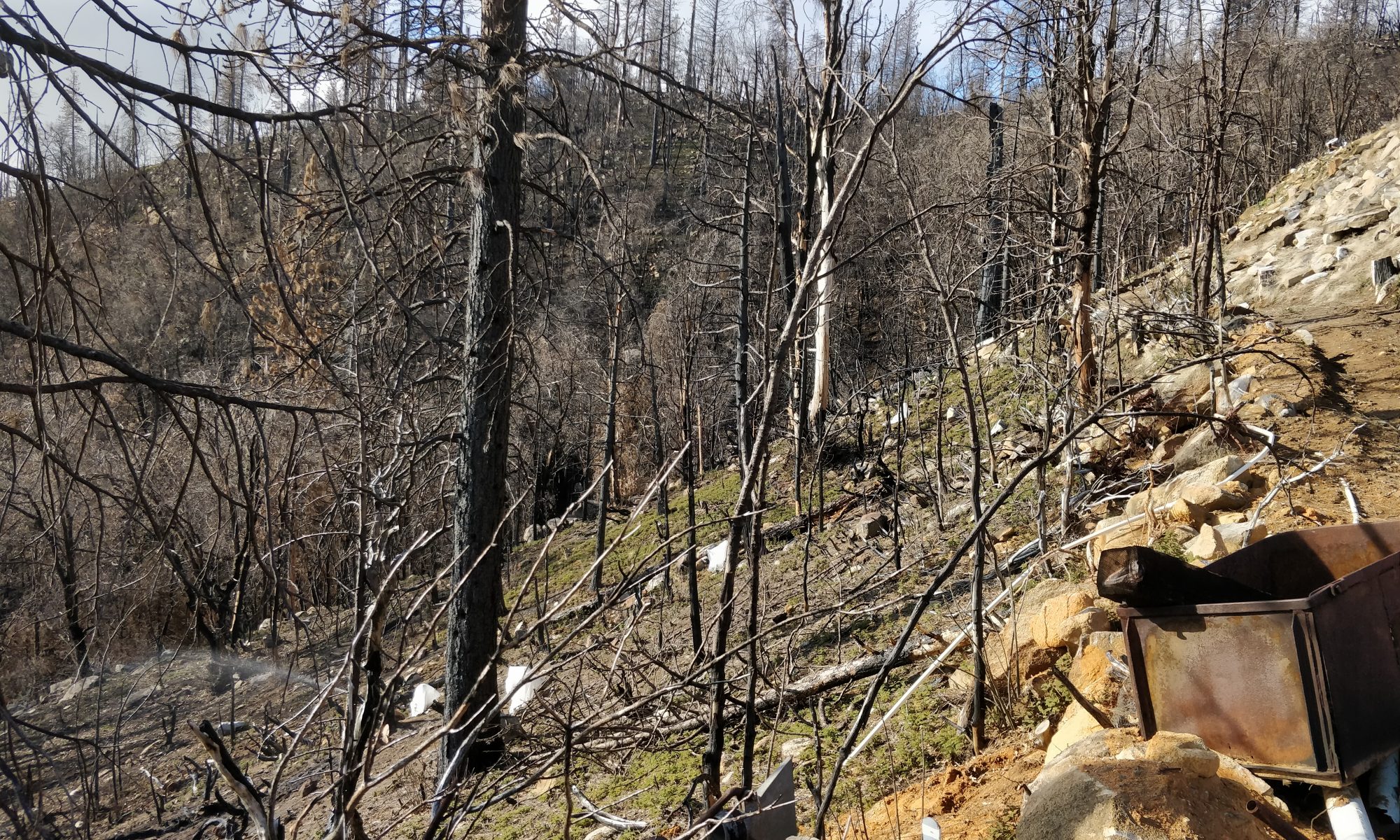 I returned to the Logger’s Retreat property at the end of January to help the civil engineer complete some tests required by the new septic system design.

A series of storms a few weeks ago (just after our last visit) brought lots of snow to California’s Sierras. But at our 5000 ft elevation all of it had been rain — more than 4 inches fell in that set of storms alone. In fact the Logger’s Retreat weather station has recorded a total of 7.1 inches for January alone. That is a lot of water!

In many ways we have been lucky that January temperatures were so mild. Had the snow levels been just a few hundred feet lower, that amount of precipitation could have left as much as 7 feet of snow here!

Our civil engineer was mindful of our good luck too. He was pushing to get these tests done as soon as possible; NOAA’s long-range forecasts were suggesting that our mild January conditions might not last.

While our driveway has remained completely free of snow, those January storms still left behind plenty of evidence of their visit.

County code requires percolation tests of the soil in the area the septic system design designates for system “expansion” — i.e. where someone could build a new leach field, should the primary leach field fail at some time in the distant future. We don’t have to actually build this secondary leach field, but we do have to demonstrate that it would be possible to build one there.

To perform a percolation test, the engineer fills a partially-buried PVC pipe with water, and then carefully measures the time it takes for the water level inside the pipe to drop.

There was a possibility of more rain overnight, so the engineer had draped plastic sheeting over the pipes, which made them look a bit like Halloween ghosts trick-or-treating across the hillside.

Of course the percolation tests require a supply of water, both before and during the actual test.

Fortunately we still have a gravity-fed water system on site, mostly undamaged by the fire. Unfortunately the engineer called me while I was driving up, to let me know that the water flow had just plain stopped shortly after he started filling his test pipes!

So my first (and essential) task upon arrival was now to restore that water flow. I poked around a bit and found the cause to be largely due to clogged piping. I spent the afternoon flushing mud and silt from the lines, and was finally able to declare victory.

Once I had running water again, I used the remaining daylight to stake out roughly where the septic system’s primary leach field lines will go. I did this mostly to prove to myself that we really did have enough space there for the leach lines as designed — another bit of “ground truth” to double-check the accuracy of our drawings.

The next morning, before I headed back home, I used the Bobcat and its broom attachment to sweep up the mess of mud and debris left on the driveway by the January rains. As you can see, the weather was sunny, dry, warm, and just plain beautiful.

The trip home turned out to have a surprise of its own. Just before sunset and about an hour away from home, the left rear tire failed — in a rather big way.

I was able to slow down and pull over to shoulder safely with what remained of the tire complaining greatly, but thankfully still protecting the wheel rim from damage.

I quickly switched into an almost automatic mode as I knew there was only a little daylight left to swap out the blown tire with the spare. I worked as fast as I could but also carefully so as not to make any stupid mistakes. The entire swap took a little over one-half hour, start to finish. It was dark by the time I rolled away, heading home again.

The hardest part turned out to be largely psychological — staying focused and productive while working on the left side of the car, alone, with cars and large trucks flying past only a foot or so away. All it would take would be a little bit of drift on the part of any one of those drivers and in an instant I would have been history.

Being in that position — on the side of the freeway, so close to oncoming traffic — really illustrated in a very visceral way the reason for, and the value of, “Move Over or Slow Down” laws.

So the next time you see someone outside of their car on a busy freeway, try to imagine what it must be like to be in their shoes at that moment. And then move over, or at least slow down!