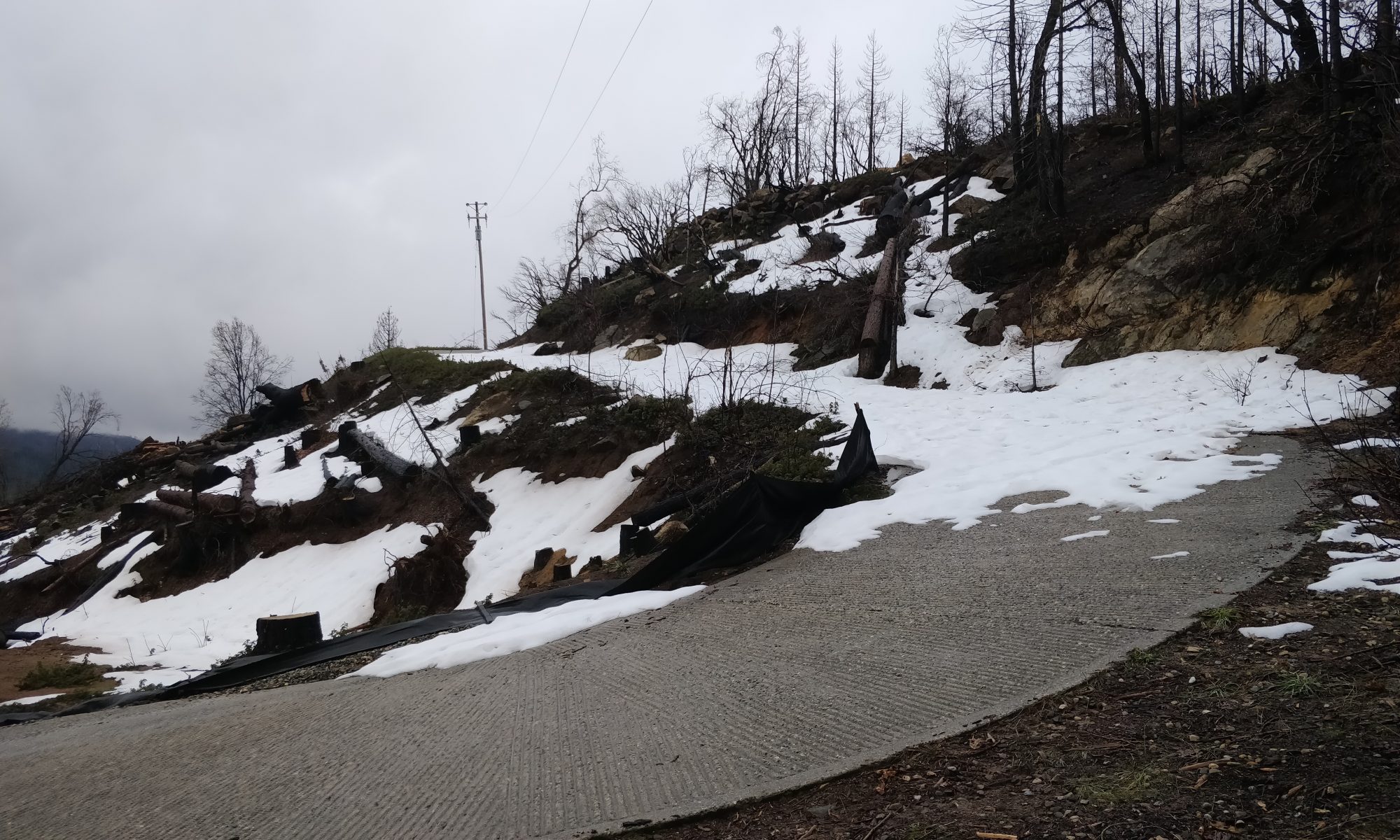 March continued the impressive storm trend set by February, with two big rains (1.51 and 0.99 inches respectively) in the first week, a third large storm (1.89 inches) in the last week, and a total of just over 8 inches of rain for the whole month.

Yes — it was mostly rain and (thankfully) not much snow at 5000 ft. By mid-month the word from those folks in a position to proclaim such things, was that California’s drought was “over.”

Well I think I’ll side with Yogi Berra on that one. But regardless, Winter in 2019 has come back with a vengeance.

The first excitement for us was learning from the caretaker that we had an empty propane tank. February’s snow had made it too difficult for the propane truck to navigate the driveway; so they just didn’t.

Worried about freezing pipes, I called to report the need for a refill ASAP. They replied that they would not try again until we had not only cleared the driveway of any snow, but also exposed the tank so that the driver could easily reach it. Time for another quick trip to Fish Camp!

I spent the morning digging out each propane tank at both properties in preparation for the driver’s visit later that day. After he refilled both tanks I had to relight all pilot lights at the Trestlewood Chalet to make sure the next guests would have a working stove and hot water.

Despite another 8 inches of rain in March, the erosion control mats were doing an amazingly good job of keeping the mud in its place. And of course, whereever there was no mat, the rain had carved deep channels into the hillside.

A few inches of heavy, wet snow remained on the driveway just above the last hairpin turn. PG&E crews had been up and down the driveway inspecting their lines for dangerous trees. (Good idea! :-/ ) I decided to take the Bobcat and snowblower up there to clear away what remained of the snow.

The trip up the driveway was fine. I ran the blower up the snowy section to clear it, turned around at the top, and made a second pass back down to the sharp turn.

All was well and good., except for a little snow left on the actual turn itself. So I turned the Bobcat back up the hill to clean up those last little bits.

In doing so I heard a brief, strange squeal. “That’s odd” I thought. Then I noticed that I could not get the snowplow to lay flat on the pavement; one end was much higher than the other. Something was amiss.

The strange squeal turned out to be the sound of a nearly flat tubeless tire as it separates from the wheel rim, rapidly becoming completely flat. Oops.

Very gingerly I managed to crawl back down the steepest section of the driveway, only hoping that I was not destroying the tire in the process. And as it turned out, being on that particular section of the hill was a blessing, because all the weight was forward, which meant the flat rear tire carried very little of it. I was able to bring the Bobcat safely back to its turnout parking spot.

Now suddenly my new challenge was to re-seat that tire before I could go home. But I had no tire pump, and my lug wrench was approximately 250 miles south of here. Time for a quick trip to the auto-parts store!

The rest of this story is a bit of “Deja Vu all over again.” Many years ago I failed to maintain the Bobcat’s tire pressure, with similar results. That was when I bought that first lug wrench (the one that was now 250 miles away).

After using the Bobcat hydraulics to lift the tire off the ground, I removed the wheel, threw it into the back of the car, and headed down to a tire store in Oakhurst.

Back then, I felt pretty stupid for not checking tire pressures, given how easily things could go very bad, very fast. After the first incident I adopted the habit of always checking tire pressure before doing anything with the Bobcat. But since buying the new (used) Bobcat, I had lost that habit, as these tires did not have a slow leak. Or so I thought. Oops again.

In the first incident, the guys at the tire store were understanding and helpful. They re-seated the tire, re-inflated and tested it…and then refused to charge us for their effort! I vowed then and there that they would get my business again.

Well, here I was, back again at their shop with my “business.” For exactly the same problem. (*Blush.* ) They quoted me a price and an estimated time. I waited outside patiently. And when it was done…again: no charge! What can I say?

Oh, and that habit of checking tire pressure before using the Bobcat? No surprise: it’s back again.

An Update on The Case of The Missing Railing

Enough snow has melted in Fish Camp so that the Little Pine’s deck is clear of snow, and you can now see how snow sliding off the roof took out the deck railing. The railing itself however, is still buried under a rock-hard pile of snow.