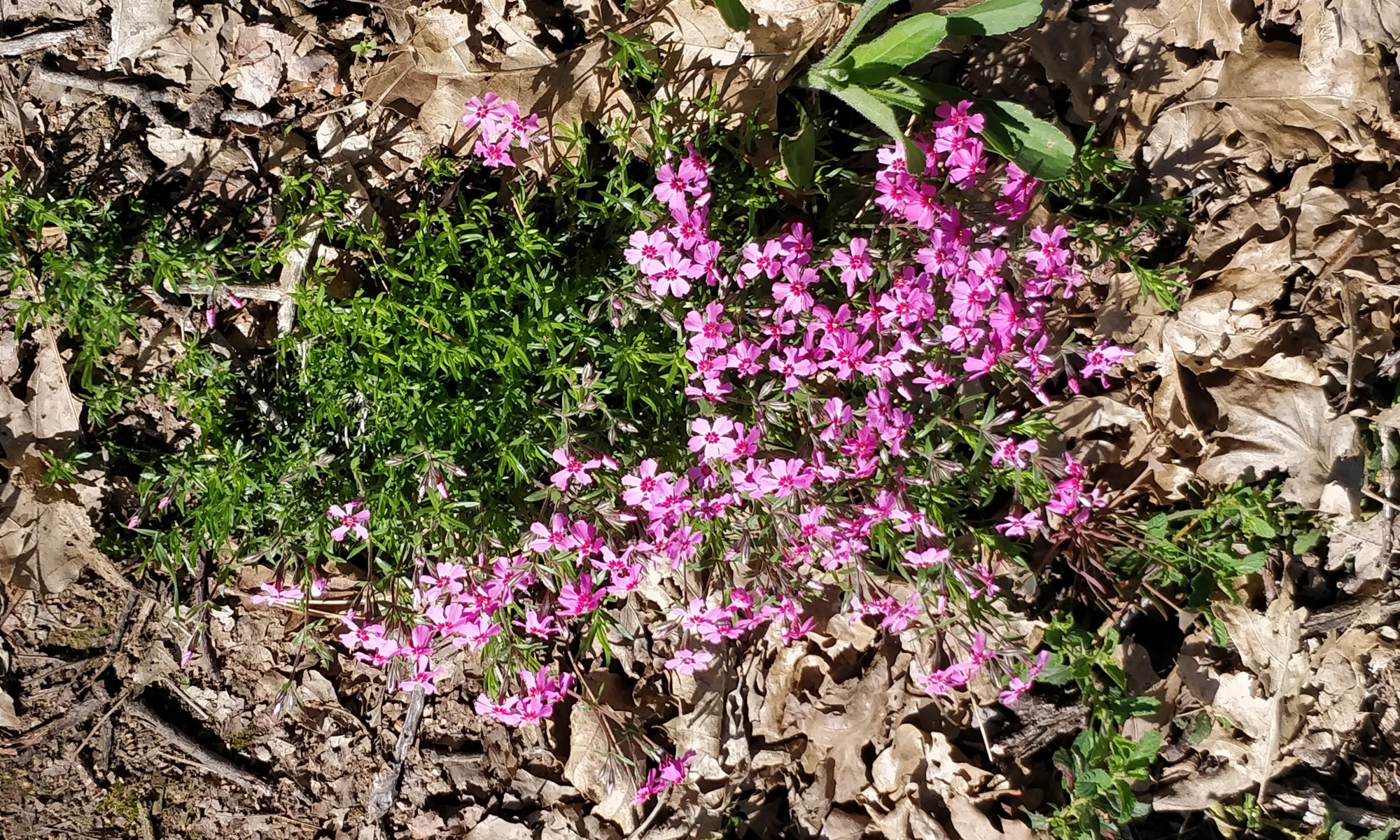 Spring wildflowers making the best of a wet Winter.

Our wild winter precipitation tapered off this Spring more or less as expected. The chart below shows the history for the entire 2018-19 wet season recorded by our weather station at the Logger’s Retreat.

Adding all those bars up, the station’s total for the year was just over 33 inches. This is lower than the NOAA record because of two factors:

NOAA’s official observed record for the same location puts the total for the year between 60 and 70 inches — well over the normal average of around 50 inches.

All that precipitation brought to the area’s burn scars a welcome fresh green carpet of Bear Clover and grasses, as well as an impressive show of spring flowers.

Too Much of a Good Thing

In April we discovered several problems caused by all that winter rain. The first was that all that rain created a lot of trouble on the forest service fire road (aka “Happy Camp” road) that runs behind the Logger’s Retreat property.

In many places the runoff itself etched ruts across the road. But worse than that was that across the burn scar areas there is little vegetation left to hold the soil in place; the atmospheric rivers in the sky above created rivers of sand and mud on the land below.

In turn those mud flows clogged drainage culverts that normally channel stream water under the fire road. Instead, now the still-swollen streams were running over, and even down the road. Happy Camp road was not so much a road as it was rutted, muddy mess.

South of our property the streams were larger, and the resulting damage greater.

This road damage will be a BIG problem for us if not fixed soon.

Small vehicles like our 4Runner can still get around the damage. But there is no way that large trucks carrying building supplies (including concrete!) could safely use this road. Even if they could, with water still flowing on the road surface the heavy traffic would quickly make the mess a quagmire.

The fact that we still have flowing water is actually an opportunity too. We knew from past experience that the easiest way to unclog a culvert is to use the stream to do much of the work. If we can just dig through the mud to find the mouth of the pipe and then redirect the flow back there, the water itself will cut a new channel for us.

We also knew that the rainy season was ending soon. So would the water. This opportunity would not last.

With a couple of shovels and lots of elbow grease we were able to reopen the smaller culverts north of our property. But south of our property the road damage was too great, and some culverts too deep for hand work. There we needed actual road building equipment.

My first step was to call the Forest Service. It was, after all, their road. They were not surprised to learn of the damage but of course had lots of other damaged roads that they considered higher priority to repair than this one. They would not guarantee any timeframe at all for repairing the road.

Yet we simply cannot build without the ability to use this road for deliveries!

I also called Sierra Telephone, to find out what plans they had for re-burying their fiberoptic cable. They were also aware of the road damage and were eager to protect their equipment. But they needed to have the Forest Service first get water flowing through those culverts again before they would even try.

Restoring the normal drainage paths was clearly the key to breaking through this logjam.

In early May we arranged for a conference call which finally occurred May 13. In it we agreed that I would hire contractors to re-open the culverts; Sierra Tel would then re-bury their equipment; and the Forest Service would get its road repaired (nearly for free). They agreed to provide fill materials (rock and gravel) should we need it.

All we need now was a Forest Service permit to allow us to do the work on their road. Despite being assured that they would expedite approval so that it would only take “a few days,” that process has now taken more than two weeks (and counting).

As bad as our road problems are, I guess they could be worse. Caltrans was forced to do some emergency road repairs on Highway 41, between the Logger’s Retreat and Fish Camp. Here the winter rains and snowmelt eroded the structural road base under the asphalt, and threatened to collapse the entire roadway.

If you pay close attention to the precipitation chart at the top of this post, you’ll notice a group of several bars occurring after May 5. Yes that was not one, but in fact two separate snow events in May, with the last one occurring on Memorial Day Weekend no less!