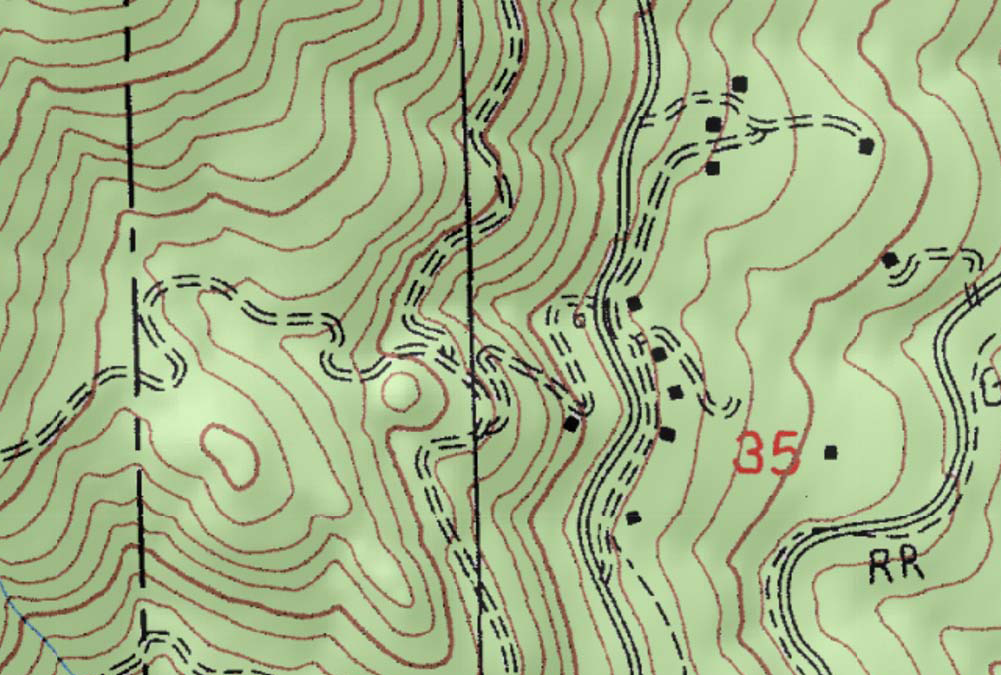 Driveway snow removal remains my biggest near-term concern, but we have also made some progress there.   (Emphasis is on the “some.”)

The driveway to the Logger’s Retreat is easily 1000 ft long and rises several hundred feet.  The steepest section has roughly a 58 percent grade, meaning 58 feet of elevation change for each 100 ft of horizontal travel.   It’s real work just to walk up that driveway, even without any snow.

As long as the driveway is free of snow and ice, it is usable.  The property gets a lot of sun even in the middle of winter, so snow doesn’t tend to last long.  But in winter months the night time temperature does regularly drop below freezing, and if the snow turns to ice the driveway becomes an ice rink — with a 58 percent grade no less.  The only way to keep that driveway safe in winter is to keep it clean.

When we bought the Logger’s Retreat in 2006, I was surprised (and somewhat excited) to learn it would include a Bobcat and a few attachments, including a plow blade.

I didn’t realize it at the time, but the reason the Bobcat came with the house was that it was essential; there is no other practical way to clear that long, steep driveway of snow.

And another important point that you may not realize: you simply cannot plow snow uphill.  Certainly not on a 58 percent grade anyway.  There you have to work with gravity, not against it.

So we kept the Bobcat and all its winter attachments at the top of the hill, in the Logger’s Retreat garage. Plus, the garage provided shelter.  It provided lighting.  And power.  I could work on the equipment there, in relative comfort, at any time of day or night.  I could keep the Bobcat’s battery fully charged.

Trust me, you don’t want to hike all the way up that hill, through deep snow, and then find the battery is too weak to start the Bobcat.  “Been there. Done that.”

But now there is no garage at the top of the hill.  No shelter, no lights, no power.  There is no Bobcat either, for that matter.

Well it is still there, but it’s not in very good condition.

And its battery is gone too, save for the solidified puddle of lead left on the floor behind it.

You might think that this is no big deal, because the Logger’s Retreat itself is also gone.  No one will stay there this Winter; no need to clear that driveway!

You would be half right.  (The upper half to be precise.) But the Trestlewood Chalet is still available for guests.  And we still need that income, particularly during the slow season, when cash flow can be an issue.  Christmas, New Years, MLK and Presidents Day holidays are the most popular rental periods in the winter.  In part because of the prospect of snow.  Hmm.

Step one was to replace the Bobcat.

If there is one thing we do appreciate (and there aren’t many) about living near a big megalopolis like Los Angeles, it is that when you need something, even something kind of obscure, chances are you can find it nearby.

Within two weeks of the fire I had found and purchased a used Bobcat S185 skidsteer with high flow hydraulics from Rexin Equpment in Long Beach CA.

The high flow hydraulics are an important feature to have when using certain attachments — like a snowblower for instance.

Not only did I get a reasonable price from Rexin, but delivery from Long Beach to our driveway was included (thanks Javier)!  Solving the delivery problem was a key factor in sealing the deal for me.  I do like one stop shopping!

By mid-September I had ordered replacement attachments as well. The most important of these are a snowblower and a broom. We need the snowblower for obvious reasons.  We need the broom to clean off the small amount of snow and slush that remains after the snowblower has done its job.   Without the broom to sweep off those remainders, you’ll still end up with an ice rink.

The attachments had a 3-to-4 week lead time, which put them arriving in the first or second week of October.  It turns out they shipped early (that’s not a problem), without any warning (that is a problem).

And due to a typical shipping SNAFU they first tried to deliver them to our residence in Altadena. The driver suspected something was not right when he realized he was trying to deliver a 1000+ lb snowblower to a residence in Southern California.  Lot’s of snow there (not)!

After correcting that SNAFU, we received our first attachments near the end of September.  Yay!

And about a week later we had the snowblower too.

I had two small mysteries to solve with the new attachments.

The first was that while the broom itself would spin just fine, I could not change the sweeping angle from side to side.  Without that ability, the swept-up debris would just accumulate in front of the broom.  That’s not very useful.

Since the Bobcat is “old” (i.e. used) but still “new” (i.e. unfamiliar) to me, I couldn’t tell whether the problem was in the attachment or in the Bobcat.  A phone call to Quickattach provided me with the (essential!) wiring diagram for the attachment, and the oracle Google eventually provided me with a PDF of the (essential!) Bobcat S185 service manual.

On my next visit to the property, a bit of sleuthing with a voltmeter verified that the attachment was wired correctly which meant the Bobcat was the culprit. The ground return side of the Bobcat’s controls checked out as well.   So that left only the power side.  Occam’s Razor suggested to me that the fuse box was the next place to look, but of course at that time I didn’t know where the fuse box was.

Oh yeah, there it is.

On the next visit I came prepared with my new knowledge of the fuse box location as well as some extra fuses.  Sure enough that fuse was blown.  Now the broom has angle control!

The second small mystery was with the snowblower.  We connected it and confirmed that the snowblower’s fan and auger would spin.  The chute rotated too, but way too fast.  Then I enabled High Flow hydraulics.  The Bobcat’s engine labored and the auger slowed down.  That didn’t sound right.

Back home on the following Monday morning, another call to Quickattach solved this mystery.  I described the symptoms and immediately the answer came back that Quickattach had swapped the flat-face connectors.  So we were pumping hydraulic fluid through the snowblower backwards.

The fix is simply to swap the connectors.  So we’ll do that on our next visit.

Of course the Logger’s Retreat garage is still gone, but at least now we have the tools we need to clear the driveway of snow.

Yay! Some progress at last.