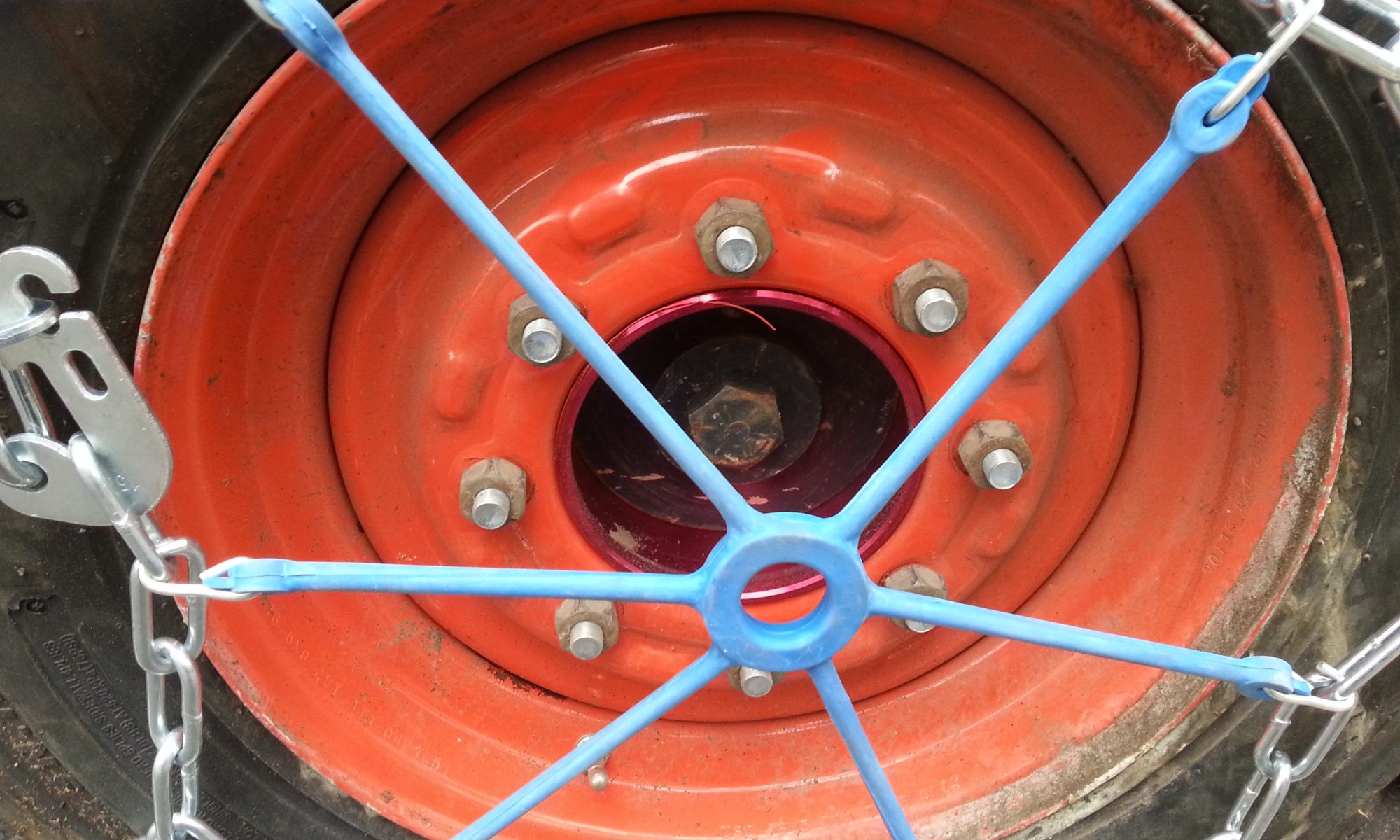 In the spirit of Black Friday, I’ll offer you another story in the continuing saga of getting the Bobcat ready for Winter.

On a recent trip up one of the things we brought along was a shiny new set of tire chains.  The possibility of snow had been in the forecast and it is much more pleasant to install chains before the snow falls, when it is still relatively warm and dry outside.  So our plan was to get the chains mounted onto the Bobcat’s tires prior to the incoming storm.

That plan was thwarted when I saw that the clearance between the tires and the Bobcat’s frame was too narrow — by at least a half of an inch.

Rut roh.  No chains installed on this visit!

Back home I researched my options.  Some Bobcat wheel rims are fancy enough that you can mount them “inside out” (actually by swapping the left side tire with the right side, so that the tread still faces forward) and thereby get yourself a bit more clearance.  But back home now, I couldn’t tell whether or not my rims were the fancy type, so I couldn’t count on that as an option.

Of course I could buy new rims with greater clearance (assuming they could be found) , or the fancy reversible ones, and swap my tires onto those.  Either of those two options was expensive and difficult to do, unless maybe you happen to own a tire store right next to your Bobcat. Not my first choice.

Another option was to install “wheel spacers,” metal rings that mount between the axle and the rim. Seems like these metal rings are not available in any thickness other than two inches.  These are specifically designed for use with OTT (“over the tire”) tank-type tracks, which apparently need at least two inches of extra clearance between tire and frame.

Tracks are great for muddy construction sites.  But they don’t grip very well on ice; chains are much more effective for that. So I won’t be adding tracks to my Bobcat anytime soon.  Two inches of additional clearance was far more than the half-inch I needed, but “more than enough” is not a problem in this case.  The wider stance actually makes the Bobcat a bit more stable.

So spacers it was.  Cast iron spacers are more common (and slightly cheaper) but they weigh more than 20 lbs each.  That’s 80+ lbs of shipping weight alone.  Spacers were also available in anodized aluminum at roughly 1/4 the weight and only about $10 more per spacer.  They also don’t rust.  That all sounded worth $40 to me.

Installation was pretty straightforward.  There was a bit of a risk that my puny two-ton hydraulic jack would not be up to the task, but it came through (just barely).

The front of the Bobcat was considerably lighter than the rear so jacking that up was a breeze.  Of course I could have used the Bobcat’s own arm hydraulics to lift the front tires off the floor instead of using the jack.  But I didn’t want to risk the possibility of a slow leak in the hydraulics complicating the process, and the jack was easy enough to use anyway.

The whole process took me approximately 2 hours start to finish.

While I was working on the Bobcat I also added a much-needed rearview mirror.  The old 843 we lost in the fire had a mirror, which frankly I didn’t think I used that much. But the new S185 came without one, and I’ve noticed how much I really did miss it.

Skidsteers are very easy to learn to drive, but what can take practice is learning how to not hit things that you don’t want to damage.  There’s so much weight and hydraulic power behind that weight that you often can’t even feel a collision when it happens.  The mirror helps prevent it from occurring in the first place.

Still Not Quite Ready

Since about mid-October the Bobcat has been beeping 3 times when you first start it, and flashing a glowplug warning light.  After you start it though the warning goes away so I hadn’t been too concerned about it.  Seemed like it might just be telling me that it was using the glowplugs to help start.

But on this last visit the morning was cold (low temps in the 40s) and the Bobcat took several tries to start.  This concerned me since it is absolutely essential that the Bobcat starts reliably in snowy conditions.

It turns out that the warning is telling me that the diesel engine’s glowplugs are not working correctly.  Diesel engines only need them for cold starts so that explains why the warning only appeared recently (Fall temperatures), and only on the first start of the day.  Either one or more of the glowplugs themselves are bad, or the electrical system supplying them has a problem.

I can’t determine  which one it is  until our next visit.  There is some rain in the forecast for next week, but fortunately not snow (yet).