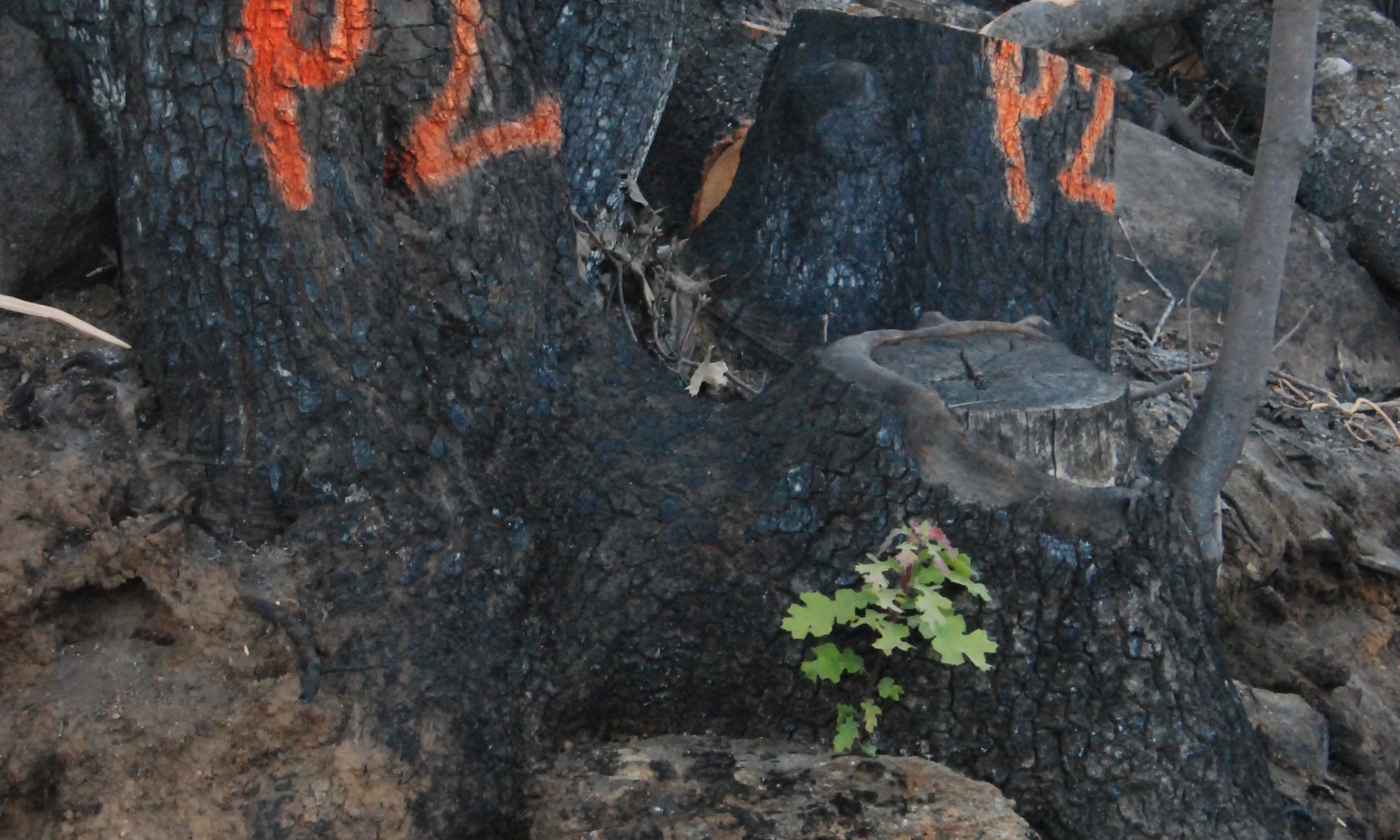 Well it’s been several weeks since my first post.  The initial feedback I’ve received about this blog from family and friends has been positive and encouraging; thank you all for that!

Writing about this process does not seem to be as difficult as I thought it might be; there are always new developments to write about.  Rather it is dedicating the time to write them down that seems to be the greater challenge.

Green Is The New Black

Some of the most remarkable developments over the last month are the natural ones. And of course they just happen all by themselves, requiring none of my time at all!  I really like that particular aspect of Nature.

Quite literally, within the first week after the fire — even while the remains of our railroad-tie retaining wall still burned — our caretaker noted a small patch of vinca had reappeared near the ruins of our hot tub.

By far the most aggressive flora seem to be the oaks.  Not three weeks after the fire started and while it continued to smolder on our property,  my brother found a tiny green sprout down by the picnic area.

A landscaper and arborist by trade, we had asked for his advice on how to best to mitigate erosion and replant the property. Among other things, his research suggests that conifers will have the most difficulty coming back, so those species will need the most nurturing.

Even Jacob Tallmon, the Madera County sheriff’s officer (and the last person to see the Logger’s Retreat still standing), had told me in passing that the oak trees would take over if left unchecked.  It appears he may be right.

About That Erosion Thing

Initially we were quite worried about erosion, given that much of the landscape (which incidentally is directly above the Trestlewood Chalet) is now essentially a steep and naked hillside.  I was concerned that a big rain this Fall might create mudslides large enough to threaten that house.

We briefly considered mitigation techniques such as covering the slopes with hay. I think one suggested application rate was on the order of 60 bales per acre.  That’s a lot of hay (and a lot of work)!

But over time other options have become apparent, and many of those use existing materials on site — a big plus in my mind.  For instance simply dropping dead trees across the slope helps stop erosion channels from forming.  We’ve still got plenty of trees to drop.  Also we learned that chipping the “slash” (smaller branches and bark) and then scattering the chips helps control erosion.

My brother pointed out that the areas at highest risk for serious erosion damage were at the steep slopes along the driveway itself. A washout on the driveway would be no fun at all.

Then the PG&E tree trimmers came back with their chipper.  What did they do with it?  They chipped their slash and shot much of the chips along the sides the driveway — right where I would have wanted it to go.  I guess these guys know what they are doing.

Another thing I’ve noticed as we have worked on the property during the last month is that even though the hillside looks barren, the forest floor itself is still a solid mat of intertwined roots, branches and decaying bark, often so thick it is hard work just to get a shovel through it. And  even though the above ground parts of trees and bushes have burned away completely, their stumps and root structure are still intact underground.   I don’t think that hillside is going to move very easily.

I’m no longer too worried about erosion.  If we find spot problems, we’ll address those individually.  And even if we were to get an actual, full-blown mudslide, I doubt if any hay or wood chips we might scatter would really make much of a difference there anyway.