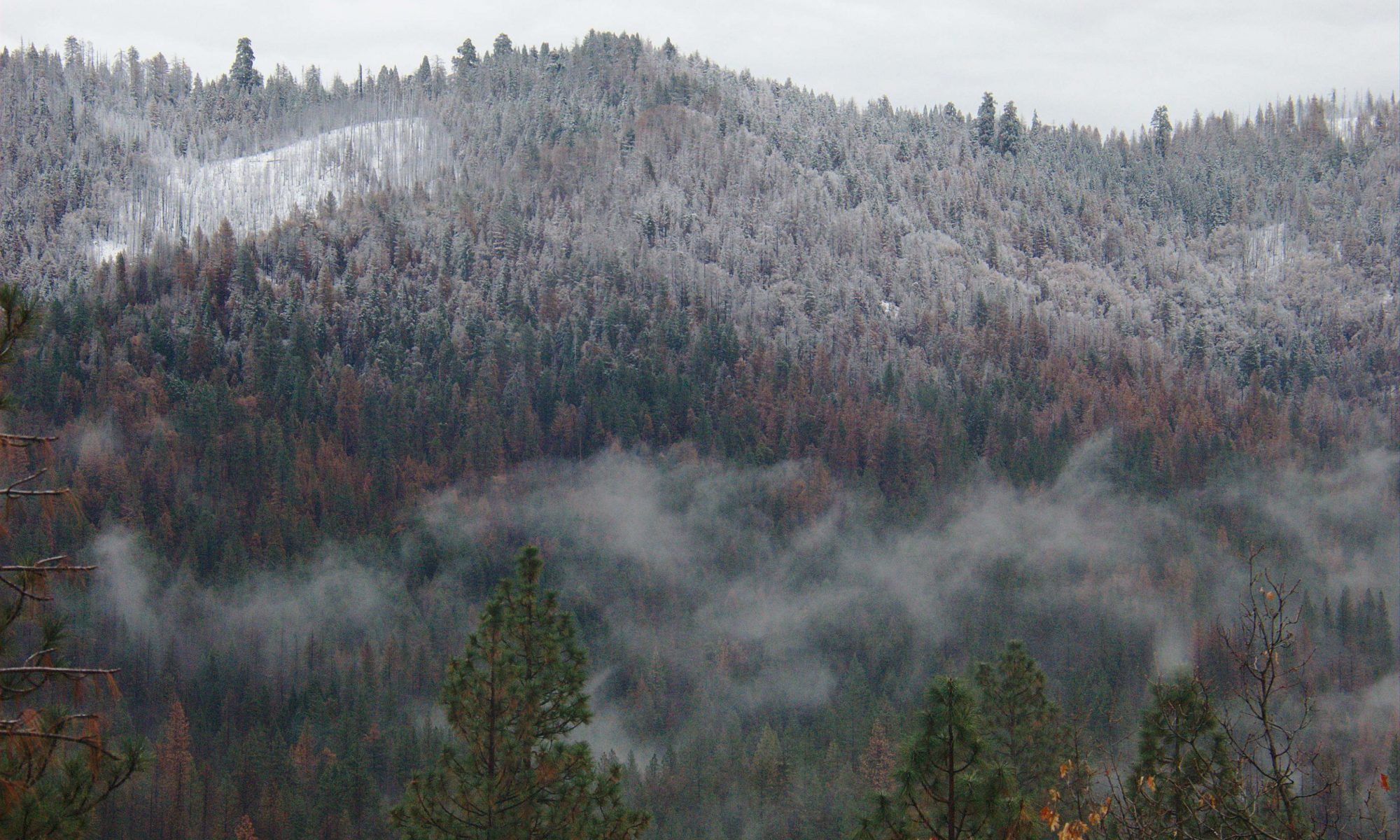 As we come to the end of the month, this winter in the Yosemite area is shaping up to look more like Spring.  While the eastern half of the country has been in the deep freeze, out here in California we’ve been mostly warm and cozy — as long as we’re not getting swept away in mud slides. of course

That same  storm system in early January that buried Montecito in mud brought this region of the Sierras south of Yosemite at least 4 inches of rain!

Yes it is true that snow would have been much better for the state’s continuing water problems, and might possibly have even  tempered the severity of the Montecito mudslides. But for us personally, it was probably a good thing that the storm was so warm.  That much rain could easily have been 4 feet of snow.

And while we did have some erosion, nothing rose to the level of a mudslide for us.

The worst erosion occurred in the area behind where the garage once stood, where the path to the picnic area begins.

Those two tree stumps in the photo above mark where the two gigantic Ponderosa pines once stood.

Around the middle of the month the forecast warned us of several inches of snow possible at our 5000 ft elevation.  There were guests coming to the Trestlewood Chalet for MLK weekend, so we had to make sure the driveway was clear for their arrival.  We drove up the night before the storm came through.

As has been typical this winter, the forecast was for the storm to start out warm and then sometime later drop below freezing.  Exactly when is hard to predict, and that “when” can make all the difference between a lot of rain with a dusting of snow, or a lot of wet snow topped with a hard crust.

We awoke the next morning to gray skies and the sound of rain.  We actually did get some snow, but it was not even enough to stick to the driveway.

The rain continued until about 10 am and washed away all of the remaining snow at our elevation.    For the rest of the day Mount Raymond played hide-and-seek with us amongst patches of blue sky and wispy clouds.

Hints of Spring in January?

As we went about our weekend  business at the property, we saw plants that were convinced it was time to get to work.  A botanist-friend of ours had mentioned that we should expect the Bear Clover to come back fast. She felt this would be a good thing as the native species is very good at preventing hillside erosion.

And sure enough, little green  sprigs of it are now covering the property.

To be honest, once established Bear Clover is not one of my favorite ground covers.  It grows so thick it is hard to walk through, and if you do you’ll find yourself covered with an aromatic, sticky sap.

Still, at this point I do appreciate any help with erosion control that Nature can provide.

So far this winter has been very mild, and while we would prefer long, gentle rains over mudslide-inducing torrents, still it has been very helpful to have the property free of snow and easily accessible.  I’ve  even been able to have several contractors visit the site and provide me with estimates.

We are now working with one of those contractors to turn our design sketches into a buildable (and biddable) set of plans.  This has been a regular source of frustration, so I am quite excited now to see him making real progress.

After those plans are done, we’ll post some images of them here  — so that you too can look forward to the future as much as I do!