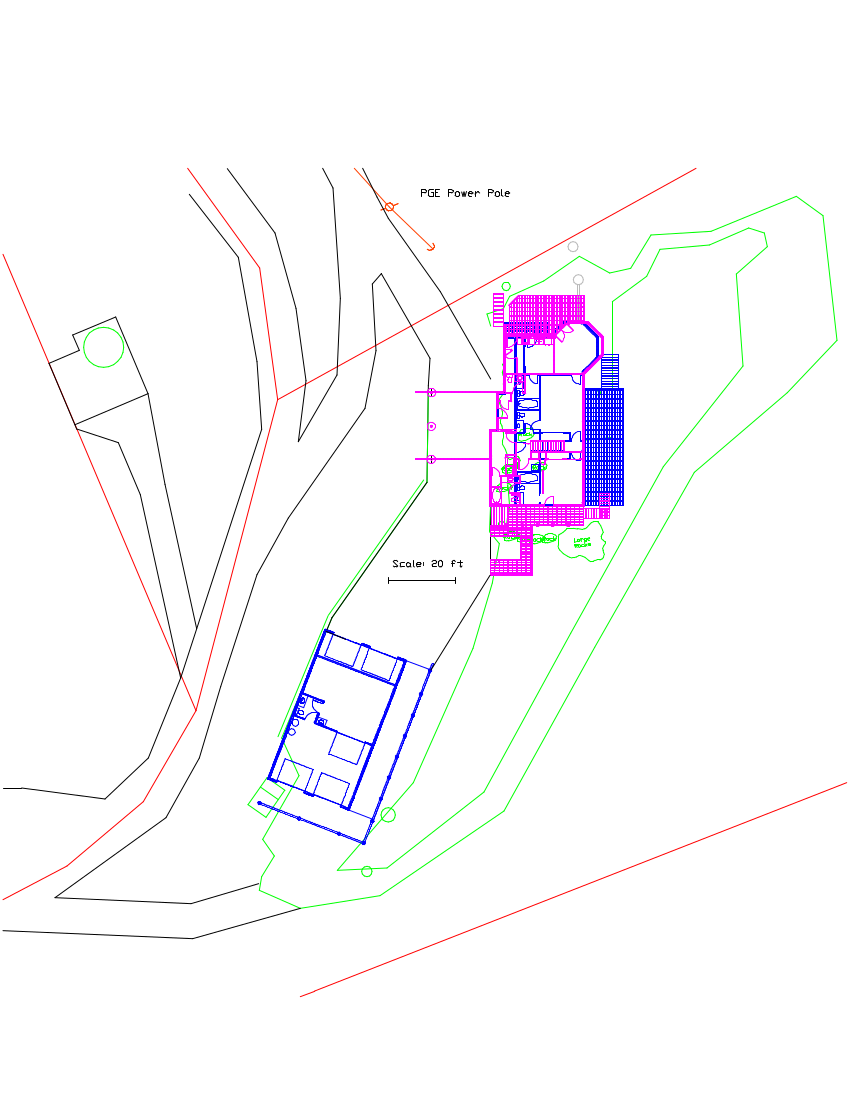 A siteplan of the property with the new structures in place

I know it has been a long time since the last post, but that does not mean we haven’t been busy!

I’ve spent most of the last month working with a contractor to create a buildable set of drawings.   Come along if you would like a quick tour!

The new design of the main house is very similar to the original.  It has essentially the same footprint & only slightly more living space.   Since the design has not changed much, I’ll mostly just point out the differences.

Because of changes to the building code, we may not be able to have quite as much window space in the master bedroom upstairs.

The old design had wrap-around windows at the southeast corner of that bedroom, but code may no longer allow that. These days they generally want at least 32 inches of wall space between a window and the nearest corner or door.  This is one detail we have the structural engineer looking into now.

The eastern face of the house will look similar to the old design.  In the drawing above it shows a sliding glass door on the left and a standard door in the middle. However in the current plan those will both be double French doors instead.

Here you can see the upstairs floor plan, as well as the upper-level decks. The only significant change here are the decks themselves.  The north deck will be  a few feet larger than before, extending eastward in front of the north-facing window of the octagon.

Not shown in the floor plan above are all of the kitchen counters and cabinets, but our plan is for all of that to be pretty much the same as before.  At this point the plan still is to have  bar stools around the kitchen counter area, but they will probably not have swiveling tractor seats, and not be anchored to the floor.

On the south (master bedroom) upper-level deck, we plan to add a set of stairs connecting it to the lower-level deck.  That u-shaped deck area on the right will be attached to, and one step down from the south deck.  It will wrap around the hot tub.

The lower-level deck will now be rectangular and significantly larger. It used to wrap around the large oak tree that grew there, close to the house.  Since that tree is now gone, there is no longer anything for the deck to wrap around.

On the lower floor, the south (right side) bedroom gets a larger closet and a full bath instead of a 3/4 bath. Double French doors open onto the lower deck instead of a sliding glass door.

The middle (“family”) room also gets French doors opening onto the lower deck but is otherwise no different from the old design.

The north bedroom gets some additional square footage plus a larger closet, and its own outside door too!   The drawing shows it opening onto a small deck, but I am pretty sure that won’t be necessary as the hillside there will already be at door-level.

The new garage will be quite a bit different from the old one.  The footprint will be wider by two feet and longer by one foot.  But the biggest change is the living space we’ve added above the garage.

On the south end of the garage there is an upper-level  deck which wraps around the southeast corner of the building.  Stairs on the east side will provide a way to get to the deck (and the living space) when coming from the main house.

Since the deck provides the only entrance to the living area, the entire deck and east side of the building will be protected from rain and snow by an overhead roof.

This is what the south end of the garage will look like, looking North.  The old garage was separated from the railroad-tie retaining wall to the West (to the left in this view) by a narrow walkway.  Our plan is to push the garage directly up against the hillside and use the west wall of the garage itself as the retaining wall.  This should save some construction costs and will also provide more usable yard space on the east side of the garage.

Another benefit of pushing the garage directly up against the hillside is that the west side of the deck will actually be at ground level there.  We’ll landscape a ramped path up to that spot as an alternative way to get to that deck (and into the living space).

Now for the floor plans…

The lower floor will be two separate 2-car garage areas connected by a fifth (internal) garage door.   This internal door will allow us to move vehicles and equipment from one garage to the other without having to drive all the way up and around the property.

The second (southern) garage area — which in the old garage was a shop — will provide sheltered parking for anyone using the living space above.

That living space itself will be a comfortable 2-bedroom, single bath home, with large East-facing windows similar to the main house.  The kitchen will have lots of cabinet space and be large enough to accommodate a round 4-person dining table.  It will be well-equipped of course! 🙂

So that’s the tour, and that’s “The Plan.”  After our structural engineer is done with his part, we should be able to submit the plans to the county for approval, and also to send out for bids.  With any luck that will happen by the end of March!